John Michael Crooke enlisted in the A.I.F at Victoria Barracks, New South Wales on the 11th of September 1916.   He joined the 36th Battalion.

John had served for 6 months in the Citizen Forces.  His postal address given was 56 Taylor Street, Annandale, Sydney, NSW.

John was 21 years and 1 month old and 5 foot 6 inches tall.  He weighed 121 pounds his complexion was sallow and he had blue eyes and brown hair. His occupation was listed as labourer.  Next of Kin was his father, John Crooke of  481 City Road, South Melbourne, Victoria.

On the 15th of September after a medical examination he was appointed to Dubbo Depot Battalion and embarked at Sydney on the 10th of February 1917 per R.M.S “Osterley”.  Disembarkation was on the 11th of April 1917 at Plymouth, England.  On the 29th of April John was transferred to the 63rd Battalion.

On the 23rd of August 1917 he was sent overseas to France to reinforce the 36th Battalion.  As part of the 9th Infantry Brigade in Belgium, John was killed in action on the 18th of October.

Witness accounts were given to the Red Cross: 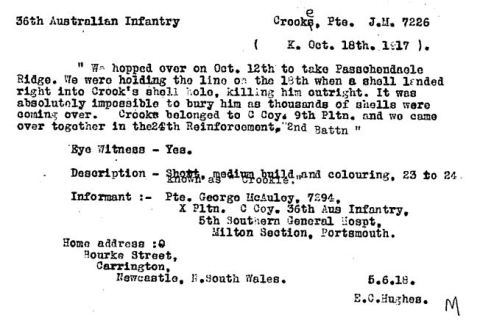 Personal effects belonging to John returned to his father were a razor, a razor strop, badges, buttons and 2 handkerchiefs. Two Discs, a wallet, a bible, photo, unit colours.