She married Daniel HULME at St Pancras Old Church on the 1st of January 1810. 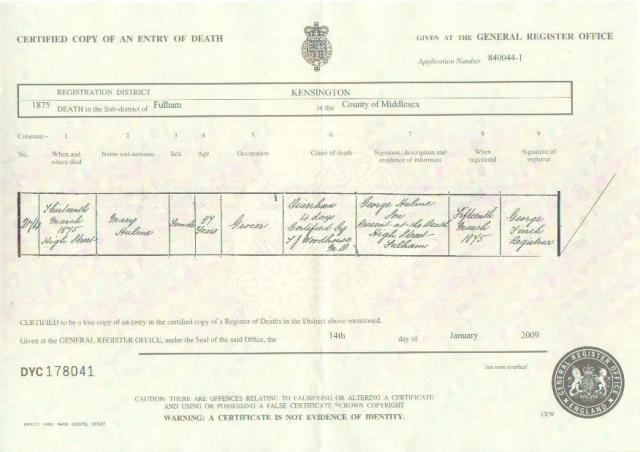 In the 1861 census living in the same household is her sister, a widow age 65 by the name of Matha (sic) Mary MEAD.  She was born at Leatherhead, Surrey.  As yet I haven’t found a WOOD/MEAD marriage but the Leatherhead, St. Mary and St. Nicholas Surrey births and baptisms has a record for Martha WOOD born March 18 and baptised April 5, 1795.
Her parents were William WOOD and Mary RADLEY.

Even though Leatherhead is about 20 miles South-West of London and Puckeridge about 30 miles North, I searched around Puckeridge, Hertfordshire for a baptism for Mary WOOD about 1788 and found her listed with parents William and Mary at Standon which is a village adjoining Puckeridge.  No mother’s maiden name though.

I then looked for a marriage for William WOOD and Mary RADLEY and found it registered also at Standon in 1788.

I am quietly confident that I have finally found my 5th great grandparents are William WOOD and Mary RADLEY, the parents of Mary HULME nee WOOD!