Update to my post of 29 September about My first foray into DNA for genealogy
When Karen told me she hadn’t been able to find Martha KNIGHT’s arrival in Australia I began searching.  According to her newspaper obituaries Martha’s sister, my great-great-grandmother, Ann Jane KNIGHT, was said to have arrived in Australia in 1847 from Gloucestershire.  I don’t know who supplied the information.
According to information given to Karen by other family members, the family came from Trowbridge in Wiltshire.
The DNA matches of we four KNIGHT descendants do agree with these findings.
In the 1841 census, John KNIGHT was a weaver living with his family at Melksham, Trowbridge.

John had married Ann LUCAS on April 8, 1824, in Trowbridge, Wiltshire.
The Knight family, consisting of father John, mother Ann and daughters Sarah, Jane (my Ann Jane), Martha and Ruth arrived in Tasmania on the ship Orleana in 1842.
Ruth went into domestic service for George MacLean who was the Deputy Commissary General for Hobart.

John went to work for a W Wilson of Davey Street.

The PINCHEN family also arrived on the Orleana.
In 1846 Ruth married William PINCHEN.
They had five children born between 1849 and 1859 in Geelong, Victoria.
William 1849, Charles 1850, Jane 1853, Ellen 1855 and Elizabeth 1859.
William must have had health problems as there was the following notice in the Star newspaper of Ballarat in September 1857. 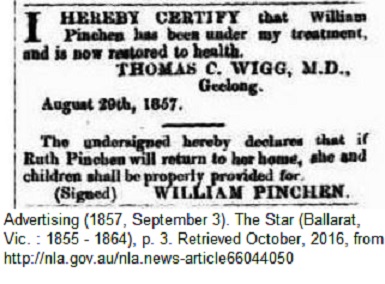 On the 9th of September 1852 in Geelong, Martha KNIGHT married James WHITE.
Witnesses were William and Ruth PINCHEN.