Herbert Douglas WAKENSHAW was born at Euroa, Victoria in 1895.

Next of kin was given as Mrs M Cowell (foster mother) of Euroa.

Herbert died of wounds on the 7th of August 1916 at the 4th Field Ambulance in France.

Herbert’s mother was Miss Emily Wakenshaw, but no father was listed in his birth registration.
I would love to see a copy of his birth certificate one day.
According to her death registration, Emily’s parents were John Wakenshaw and Elizabeth Vidler Wakenshaw nee HEWISH.
She was born at Euroa in 1875 so was 19 or 20 years old when Herbert was born.  Emily had an older sister named Marion Elizabeth Vidler WAKENSHAW who married George COWELL.
This would be the Mrs M Cowell listed as Herbert’s next of kin.
In 1897, when Herbert was about 2 years old, Emily married my great-grand-uncle, Alexander Frederick MORGAN.  Also in 1897 a sister for Herbert, Elizabeth Marion MORGAN, was born.  Her birth registration names Alexander as her father.
Three more children were born to Alexander and Emily.
George Alexander in 1899
Emily Grace in 1901
Isabella Ida in 1902.
Sadly within a fortnight of Isabella’s birth in 1902 Emily died of exhaustion and diarrhoea.
Seven years later, in 1909, Alexander MORGAN remarried Alice McCann who may have been formerly Alice Ryan. They had 4 children.
Violet born 1909
Benjamin born 1912
Frederick born 1912

To be named as his foster mother, Herbert’s maternal aunt, Marion COWELL, may have raised him after his mother’s death and his “step-father’s” re-marriage.

Herbert was 5 foot 9 1/2 inches tall and weighed 11 stone 5 pounds.  He had a fresh complexion, grey eyes and brown hair.

On the 25th of August, 1915 at Melbourne, Herbert embarked on the HMAT Anchises A68.
On the25th of October 1915, he was taken on strength at Gallipoli Peninsular.
On the 2nd of December 1915, Herbert was in hospital at Heliopolis, under treatment for severe frostbite and mild rheumatism.  By the 8th of January 1916, he was at the Australian and New Zealand Convalescence Depot at Helouan and was discharged to duty on the 16th of January.

In early March, he rejoined his unit in the canal zone and proceeded to join the British Expeditionary Forces at Alexandria, Egypt. On the 26th of March, the unit disembarked at Marseilles, France.

On the night of the 29th-30th of June, Herbert’s company took part in a raid on the enemy’s trenches.

On the 30th of July he was appointed Lance Corporal and on the 5th of August was reported missing.
He had sustained shrapnel wounds to the legs and died of these wounds on the 7th of August 1916.
Herbert was buried at Warloy Baillon Communal Cemetery Somme, France,  Extension (Plot VII, Row E, Grave No. 56

After some correspondence with the war office, Marion was able to receive Herbert’s medals and wrote the following letter stating he was in her care after the death of his mother. 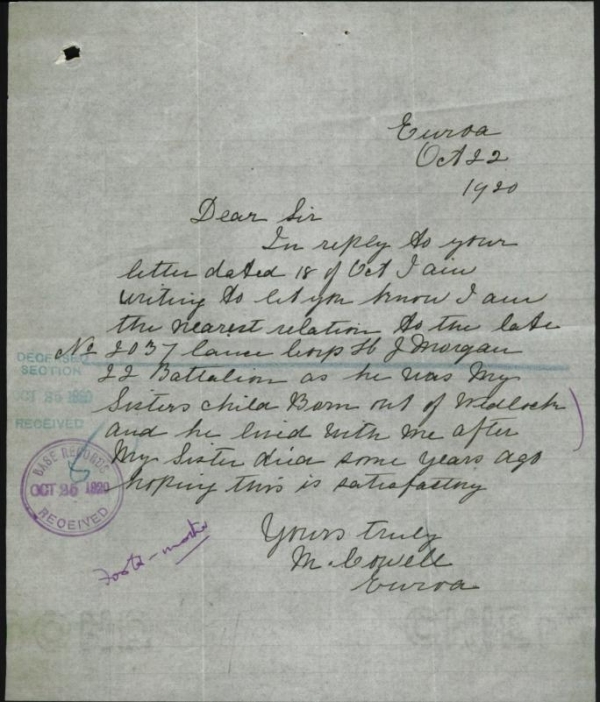 The following notice appeared in the local newspaper, the Euroa Advertiser on the 8th of September, 1916.