My maternal Great-Grand-Uncle Thomas Fitzherbert MORGAN and his wife Sarah MCNAY were married in Victoria in 1894.

They had eleven children born between 1895 and 1918, eight boys and three girls who, all except one of the girls who died of Meningitis at the age of 12, survived to adulthood.  One son, William was killed in World War One and another son Benjamin died in a German P.O.W camp in World War Two.

EUROA Thursday – The Morgan family of Euroa has a fine record of service. Seven of the eight sons of Mr. and Mrs. T F Morgan, of McGuiness street, Euroa have served or are serving King and country.

Privates A. T. Morgan and T. F. Morgan and Bugler W. J. P. Morgan killed in action on Gallipoli served with the A.I.F:  Petty-Officer J G Morgan has served his term in the Navy. Private John S. G. Morgan and Private B. R. Morgan have enlisted in the Second A.I.F and are in camp: and Lance Corporal H.C.S Morgan is in camp with the Militia at Seymour. 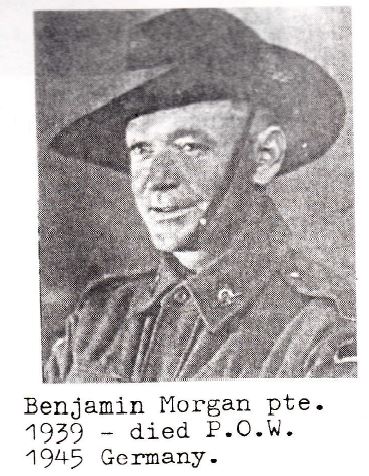 Photos are from the Morgan Family Reunion book 1980 which was contributed to by many family members and compiled by Rhonda Morgan, then Payne.